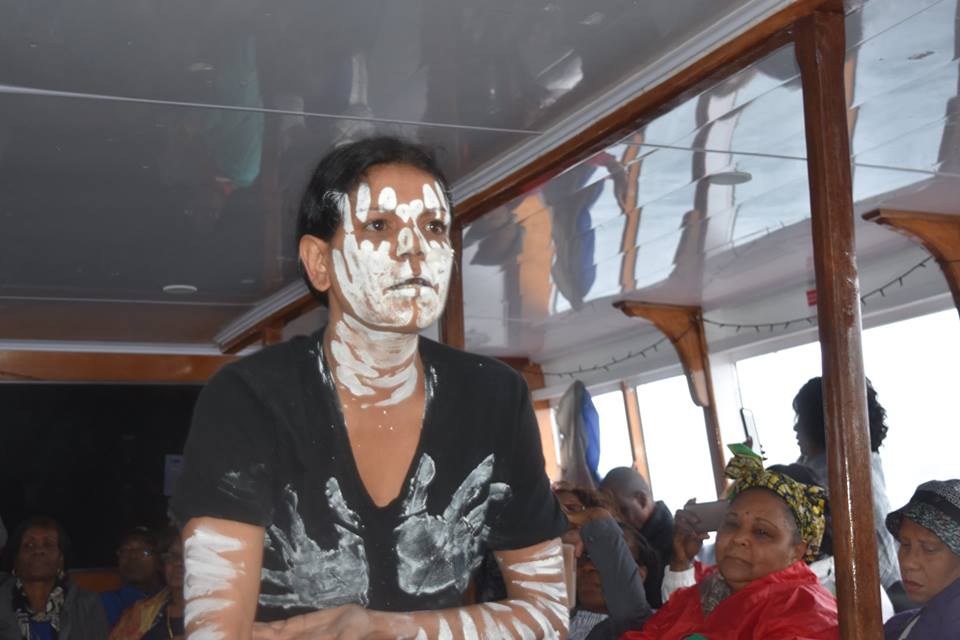 “They came to our land with a Bible.  Now we have the Bible, they have our lands.” Unknown.

The Aborigine narrative, all over the world, sounds pretty much like one size that fits all.  It is the repeat story of one nation with a higher level of organization, civilization, and peacemaking, falling prey to ferocious primitive unprincipled adventurers whose only goal is to amass the maximum wealth possible, in the briefest amount of time.  A genocide follows. Eventually, History is written by the criminal perpetrators, setting themselves up as proponents of civilization.

This morning, we had a chance to travel to Clark Island and experience first-hand the life and the culture of the Maori people of Australia.  By 9:00 AM, we were at Wharf #1, at Circular Bay. The dock was occupied by a Captain Cook vessel. We waited a fraction of an hour for the Tribal Warrior vessel to anchor.

On our merry way to the island, it started raining.  An hour later, while we were visiting the virgin side of the island, the serene rain degenerated into a downpour.  A violent wind would reap our umbrella off our hands.  Cameras got damped. The Maori gods were totally angry. We ran back to the boat for cover.  We missed the cultural presentation that was prepared for us and that would have taken place on the island central square.

Onboard, we had a bastardized version of the show; two crew members of the Tribal Warrior made the best out of the situation, by performing some aboriginal dance. We completed the session with an electrifying Caribbean root music to which the travelers-explorers jumped and danced.

Off the boat, we went to the Australian Museum.  On display were the relics of thousands of years of Australian history and anthropology, on two floors. The section dedicated to biodiversity was quite didactic.

The CME group left the museum early and dwelled into the complexities of electrolyte balance and abnormalities.

Tonight, was Red Carpet Dinner Dance. The event was staged at the Pavilion in the Park. Dress Code: Manhattan Night Club Original.  It was an evening of fun, entertainment and complete elation. We had a performance by the Sydney Brazilian Dance Company, then an international dance party where we danced to the tune of Macarena, amongst many others.

A DAY IN THE BLUE MOUNTAINS