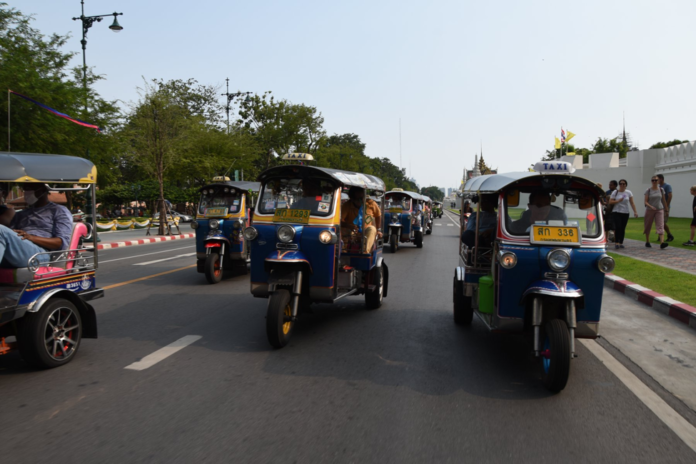 “If everything seems under control, you’re not going fast enough.” ― Mario Andretti

On this Friday afternoon, passersby and drivers on the celebrated Ratchadamnoen Road, in Bangkok, witnessed a loud and curious spectacle. A long caravan of 47 tuk-tuks was rushing down the famed, large and elegant avenue in a concert of furious roaring. They carried dozen foreign-looking multiracial passengers donning cameras, camcorders, and cellphones. The invaders were filming their own invasion of a city that is never quiet.

A tuk-tuk is a mechanized three-wheeled carriage that competes with regular metered taxis for passengers and attention. Noisy and uncomfortable, they generally make it up with their multicolor design and their thrilling ride between larger vehicles stuck in standstill traffic.

Motorists on the other side of the avenue stopped to record the spectacle, while pedestrian moms pulled their progeny closer to the protecting comfort of their bosom. The oversized pictures of King Rama X and of his royal family, disseminated all over the thoroughfare, look upon the spectacle with monarchic reprobation.

The race lasted 35-minute of overflowing adrenaline and will etch in the travelers’ memory as a moment of glorious folly generated from the mind of the trip planners. It transformed professional adults into bewildered juvenile riding the new supersonic carousel at the state carnival.
……………

In the morning, while the group of “scientists” discussed the intricacies and therapies of systemic hypertension, two buses led the “vacationers” to a Grand Palace and Emerald Buddha Tour.

The Grand Palace, on Ratanakosin Island, was built in 1782. For 150 years, it became the official residence of the Kings of Siam. Nowadays, it is used for major monarchal events, such as a coronation. It encompasses several impressive buildings and the Temple of the Emerald Buddha.

The Emerald Buddha is akin to the Palladium of Ancient Greece and Rome. It protects the city. It impresses by its dazzling architecture and intricate details. The two monuments are grand highlights of Bangkok that should not be missed.

In the afternoon, after the tuk-tuk ride, the group visited one more temple. There are 400 of them in Bangkok. Then, the travelers returned to the MBK for more shopping. An intermittent fine rain dissuaded them to travel to the food market.

They had collected some solid bargains before heading to Anantara Riverside to get ready for the Red-Carpet party. It was to be held at the Blue Elephant. In less than an hour, every traveler showered, dressed up, and was back in the buses.

The Blue Elephant, a dated venue on Sathorn Road, offers a culinary and surrounding experience into the 19th century, akin to a tete-a-tete with a countess when the country’s name was Siam. It is described as a “high-end Thai restaurant for traditional royal cuisine in colonial-style surrounds, plus classes”.

The venue was not large enough for the dance party scribed in the program. But spirits remain heightened to the sounds of the background music and the deliciously flowing delicacies. The crowd exited on the red carpet.

A large group went dancing at the café terrace of a large hotel neighboring the Anantara, the Avani Riverside. No dancing time was left behind.