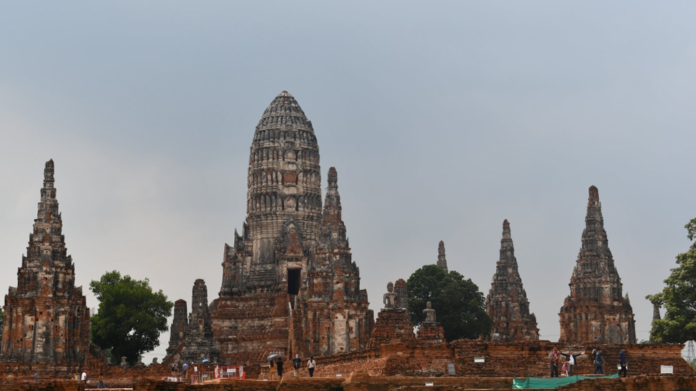 On Saturday, like Doc Brown, the group traveled “Back to the Future”. They would have needed forty-seven DeLorean, but they were reduced to ride the regular ole buses of the 21st century into medieval times.

It took them two hours to drive from Bangkok to Ayutthaya, the second capital of Siam, located 80 km (50 mi) north of the current capital.

Ayutthaya (or its ruins) is what remains from the grandeur and elegance of the South Asian power of five centuries ago, a regional empire that encompassed most of the subcontinent. Today, Ayutthaya is a UNESCO World Heritage site. Founded in 1350 AC, the city was destroyed by the Burmese in 1767.

Once you cross the boundary of Ayutthaya, you are immediately transported to ancient times. There is so much to visit, one would take a week to see every palace and monument. Among them are 41 temples, and multiple buildings of the royal palace, Bang Pa In Palace. Some of the structures are on the island, the others are on the Thai mainland.

The Travel O Ganza time travelers had only five hours to complete a 7-day mission. They did away by visiting the Royal Palace, the Temple of Earth, and by taking a sightseeing cruise on the Chao Phraya River. Before leaving the old city, they spent some time at the Floating Market, shopping and enjoying the local band.

By 5:00 PM, they were back to future, at the Anantara, for continuous medical education on Hypertension, Three hours later, everyone was on the red carpet, some with their brand-new custom made outfit, on their way to dinner at Latest Recipe, the restaurant perched on the second floor of Le Meridien in Patpong, the sex capital of Asia.

Patpong, Nana Plaza, and Soi Cowboy are the main choices for anyone on a Sex Tour to Thailand, which happens to be a very popular activity, among Western young men aged 18 to 85. The streets are lined with bars, nightclubs, and motels, stocked with hundreds of young and elegant girls. Some hang out in the streets. They have the reputation to be docile in demeanor, artful between the sheets, and often highly educated.

The main advantage of Thailand is the bargain. What costs $500 in New York or Las Vegas, goes down to $30 in Bangkok. Neighboring hotels are 70% cheaper than they are in America. Meaning: the young GI stationed in Japan will rent out a temporary fiancée and pay a full week honeymoon for less than $500, consistent with his salary. Hmm!

It should also be mentioned that the sex industry in Thailand is not limited to heterosexuality. At the mall, one may think that half the male population is transsexual or homosexual.
The Traveller