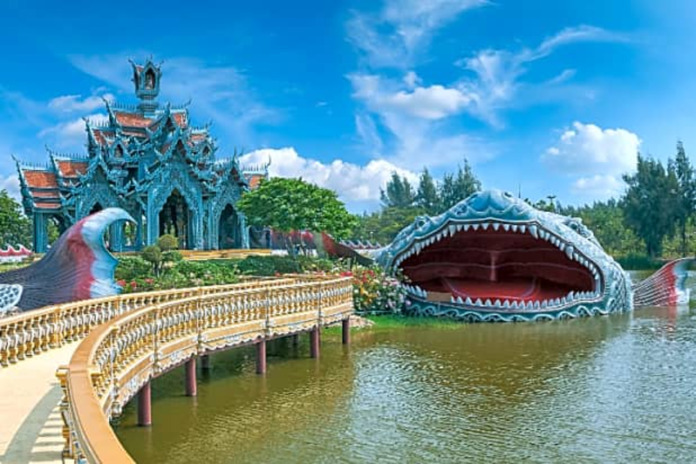 “An appeaser is one who feeds a crocodile hoping it will eat him last.” Winston Churchill

Via Route 3, Ancient Siam is an hour away from the Grand Palace. There again, the majesty and artistic genius of the monarchy is in full display. Over 320 acres, it showcases 116 monuments and buildings, a collection of replicas of the old kingdom.

Crocodile Farm is not very far from Ancient Siam, on Route 3. Yai lives there; with its 6-meter body length and 2400 lb. in weight, it is the biggest crocodile in captivity in the world. More than 100,000 crocodiles live in the zoo, alongside elephants, monkeys, lions, tigers, etc. Several times a day, visitors can admire their ability to follow commands and exhibit their individual talents.
……………….

On another track, “Hypertension for the Non-Specialist” ended at 1:00 PM. The course lasted 16 hours over four days. It covered the entire field, from physiology to therapeutics to procedural interventions.

The three buses departed at 2:00 PM for the last shopping spree in Bangkok. The destinations, this time, were Central World and Platinum, two major shopping centers in the Pathum Wan district. Everything that you need for yourself or the house is there. The prices are fabulous. The ransacking lasted four hours. Many travelers ended up buying a new suitcase to take home their prized acquisitions. Extra trucks will be needed at departure time…

The farewell gala is a semi-formal ritual. Staged in the grand ballroom, it started at 8:00 PM. Near the entrance, the travelers stopped under at the arc made of dozens of multicolored balloons.

The Honorary President officially opened the evening with his farewell address. Then, the artists took over the floor. There were two dance shows: The Northern Welcome Dance and The Light Dance Show. They were interspaced by a Muay Thai (kickboxing) performance.

Dinner time was certificate time. First, the CME and CEU certificates were awarded to the dedicated “scientists” who missed all the morning excursions for the sake of erudition. Then, every traveler received a Travelearn certificate for the expertise they acquired in the field of Thailand history and culture. This is a dear memento to bring home.

The gala dance party started at 10:00 PM. It did not rival the explosion of energy released during the First Night’s intense hoodang on the Showboat Cruise on Sabai. One preoccupation was prevalent: most travelers had too much to pack.

Check-out was at 3:00 AM and airport transfer was an hour later. The stamina was therefore saved for Phuket, the Paradise Island, the second leg of the trip.