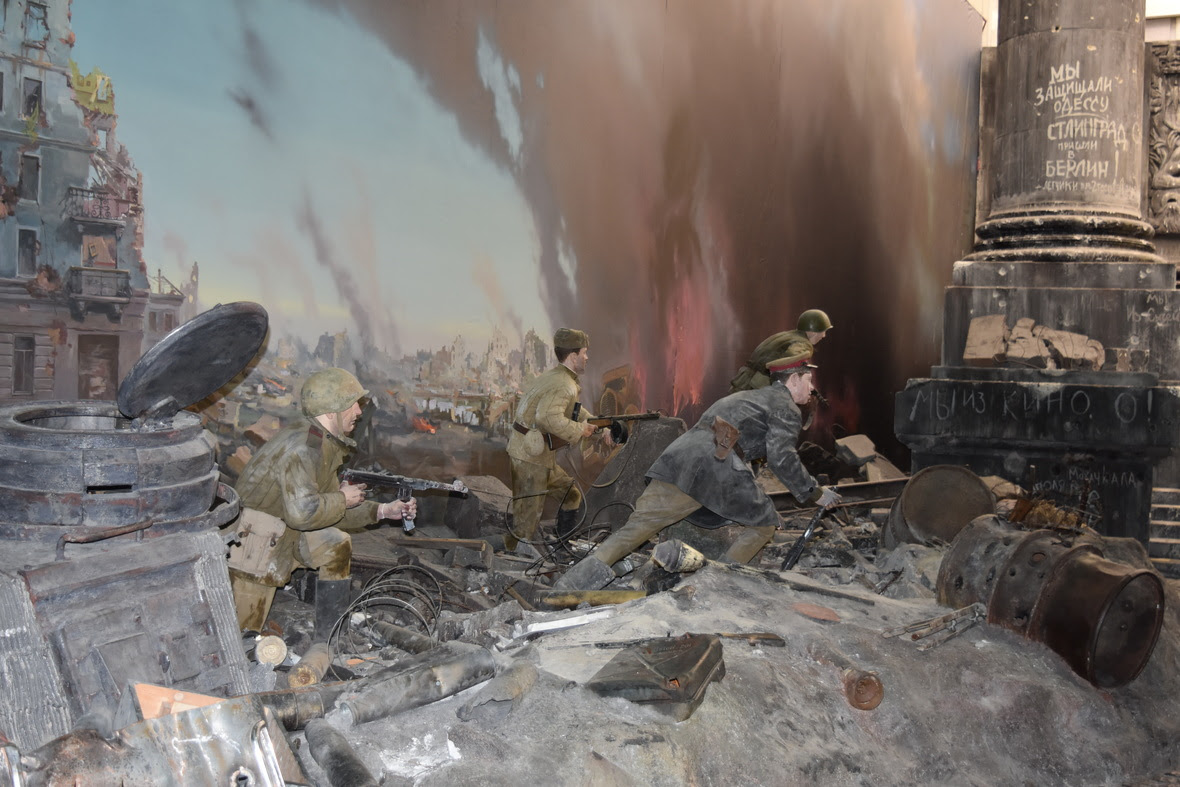 “Those who fail to learn from history, are doomed to repeat it.”

Lately, the international media has been considering (or auguring) the possibility of a major armed conflict between two major military powers. The remedy to such a blunder would be to schedule all world leaders to take a tour of the Victory Museum in Moscow.  It tells the history of World War II, that ended only 74 years ago, and killed 81 million people.  Not all wounds have closed. Some have left permanent scars.

Yesterday, June 22, was the 77th anniversary of the German attack on Ukraine, and the beginning of the World War II for the Soviet Union.  We witnessed some ceremonies taking place inside and outside of the Victory Museum, at Ploshchad’ Pobedy, 3, Moskva, 121170   They were both majestic and emotional.

Inside the museum, children and adults were re-living the past.  Beside dozens of mementos, we saw the dioramas of the major battles of Moscow, Stalingrad and Leningrad, we watched the suffering and hecatomb attached to them… We made a virtually visit to the concentration camps where 6 million Jews and the entire Gypsy population perished, sacrificed on the altar of racial supremacy.

We later visit Saint Basil Cathedral that symbolizes Moscow and Russia in half of all adverting images.

The outside is breathtaking now, but one is left to wonder if the interior does not need some alterations and some hand rails.

The Victory Museum and Saint Basil Cathedral are must-see in Moscow.  Please do not miss them.

We had lunch at La Duree, a nice French restaurant a few minutes away from Red Square. The food was delicious and surprisingly inexpensive.  There, we watch the Brazilian national team saved in-extremis from a first-round World Cup elimination, by beating Costa Rica 2-0, with both goals scored in added time. Wow!

Back at the hotel, we witnessed Nigeria taking a definitive option for the second tour by tearing through the Islanddic Cinderellas (2-0).

In the evening, Serbia played Switzerland, the Eastern Europeans lost by 0-2.  It is a surprise. But theTravel O Ganza travelers did not see much of the game, since it fell contemporaneous with the Welcome Dinner Dance staged, for the Travel Club,  on the second floor grand ballroom of the Palmira Business Club.

Beside the food, the birthday cake, and DJ Rudy the International, the program included a review of Russian entertainment that included dances, music, songs and the astonishing interpretation, in Russian language, of Western singers, such as Charles Aznavour and Julio Iglesias. Amazing!

The night ended with an over-the-top jump and twist dance party that left every reveler sweaty and lubagoed, i.e unable to get out of bed this morning….

From the Palmira Business Club, this is the Traveller reporting from Moscow, capital of the former Soviet Union…