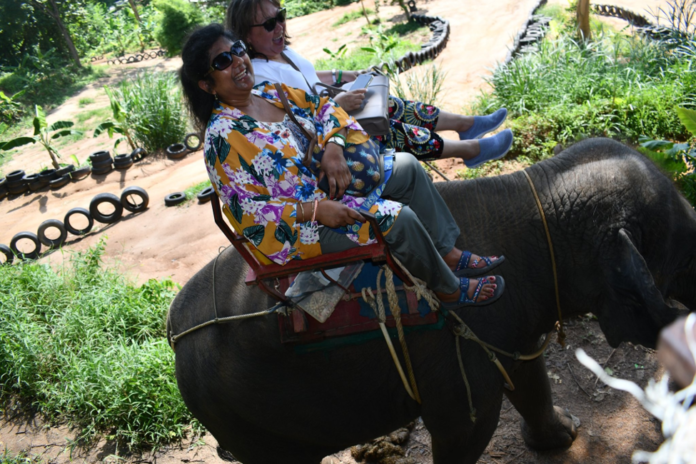 A century ago, 100,000 elephants lived in Thailand. Today, the number has plummeted to less than 5,000. They are often killed for their tusks or used as attraction or entertainment, obviously without their signed consent. Most of the living ones are in captivity or in sanctuaries

Part of the curriculum of a stay in Thailand is to interact with the elephants, the smartest living animals. On a grand scale, it is an opportunity only offered in India, Southeast Asia, and a few countries on the African continent.

From Angsana Laguna, it takes an hour and a half to reach Phuchada Safari, in Rawai. The large buses would not fit on the narrower and sinuous roads; so the group rode seven smaller buses accommodating only 10 travelers each.

Besides riding and feeding the elephants, Phuchada offers the opportunity to survey the surrounding savanna with one of these popular four-wheelers, the ATV quad bikes. For an urban American, these make a seminal moment and a cross-out mark on the bucket list. Some regret that the elephants are to be kept in captivity and forced to carry “passengers” for no reason that would benefit them. It sounds like slavery.

From Rawai, the journey continued onto Nakkerd Hill, near Chalong, on top of which seats Phuket’s Big Buddha, otherwise known as the Great Buddha. The 45-meter tall statue’s proper name is Phra Phutta Ming Mongkol Akenakiri. This is the world’s most popular Buddha. This is Phuket’s Eiffel Tower, one must take a picture there. The Travel-O-Ganza travelers took a few.

The next stop was the Phuket shopping spree. The ideal destination was Rich Home Souvenir, the epitome for bargain shopping. The emporium has all you want to take home: keepsakes and knick-knacks, gowns and t-shirts, keychains and jewelry…

Lunch break was at Jungceylon Shopping Mall, also in Patong, near Bangla Road. It is a city in the city, the finest expression of high-end shopping, the mother ship for the likes of Rachel Green (Friends).

The center is home to 200 shops. It can accommodate up to 100,000 shoppers. It is an entertainment venue featuring a 16-lane bowling alley, a gaming arcade, and a five-screen cinema multiplex. For luncheon, the travelers had a choice between the 25 restaurants.

Between the two bouts of shopping, the group spent some time at world-renown Patong Beach. Some took a dip in the blue warm water of the Andaman Sea. Another picture worth taking.

Back at idyllic Angsana Laguna, the dimming hour of the day was spent at the pool or the beach. At 8:00 PM, the group celebrated at Goodbye Dinner Dance. It was the song of the Albatross.

It was time to return home. The riddle in everyone’s mind was how to pack the load of proud shopping acquisitions made in Bangkok and Phuket.