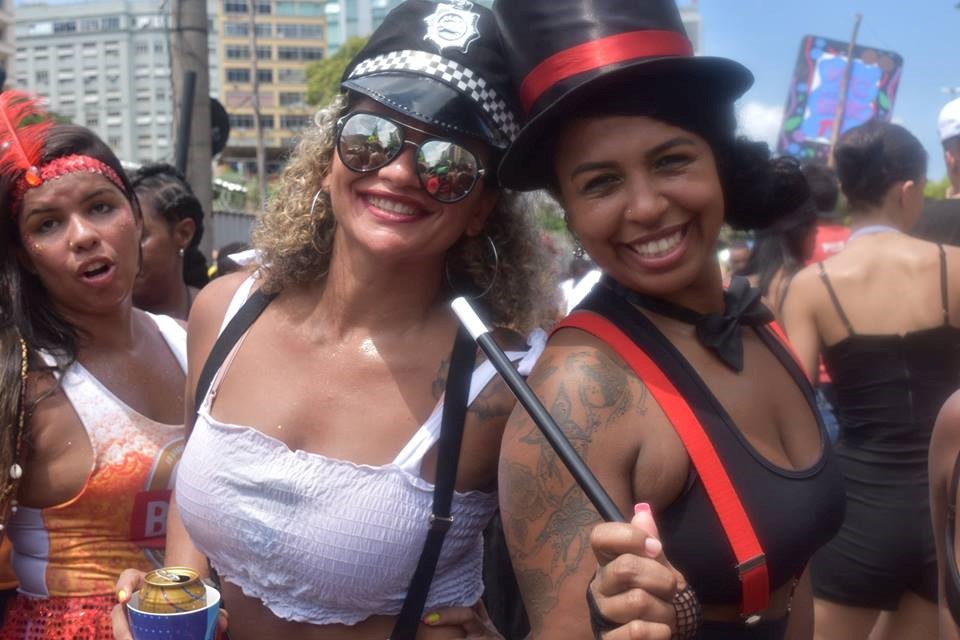 Monobloco is the new sensation in Rio de Janeiro.  The trio electrico has adopted the Bahia concept of an ambulatory street party.  Their show has become a staple of the post-carnaval feria.

After some scant sleep hours, the Group in red abada t-shirts, headed toward downtown (o centro) to meet Monobloco.  The atmosphere was at high excitation level. The weather was hot and dry.  The band was playing on Avenida Presidente Antonio Carlos. They were to depart from the Garagem Menezes Cortez and end the show in front of Santa Lucia Church. We met them somewhere half-way.

Most of the Group enjoyed the show from the sidewalk.  But the brave and the furious got drowned into the crowd of several thousands. They danced, bounced, jumped, whined, till the end.  It was a two-hour block of physical prowess, heavy sweat, that resulted in acute myalgia, chronic exhaustion, and later, in a withdrawal syndrome.

Right after the bloco, the Group started City Tour #2. The highlight was a stop at the Maracana Stadium, the most famous sport facility in the world, the Mecca of World Football, officially named  Estádio Jornalista Mário Filho. The Maracana is intricated in the history of the Brazilian nation.  For this country embedded in its passion for the round ball, it has been a reminder of the Brazilian Day of Agony, otherwise known as the Maracanazo.

On July 16, 1950, Brazil needed a draw against Uruguay during the final game of the World Cup, in order to win their first World Cup.  Every single Brazilian was sure of the result.  It becomes certain when Brazil took the lead, at the beginning of the second half. But Uruguay resisted all further assaults, to finally win by 2-1.  That was a national disaster. Brazilians killed themselves by jumping off the heights of the Maracana. That led later to a re-formatting of the arena.

Of note, in July 2014, History repeated itself, when Brazil lost the semi-final against Germany, at the Maracana, by the humiliating score line of 1-7. Otherwise, the stadium is a Brazilian fetish that has given moments of pride and exultation to an entire people donning the Green and Gold.

The Group spent the afternoon hours at world-famous Ipanema Beach.   Richer, younger, more sophisticated, more culturally progressive than Copacabana’s, the crowd of Ipanema has been growing exponentially over the last decade. It is also pointed out that the water at Ipanema is much less turbulent. At this time, Ipanema seems to be wining the decade-old battle of the minds.

The day ended at Fogo de Chao a beautiful restaurant planted on an escarpment dominating Guanabara Bay.  The Churrascaria menu was delicious and affordable. A brief moment on the Venetian patio on the back, makes you feel like Icarus, capable to open your wings, and fly into the beauty and the calmness of Guanabara Bay, perhaps the most stunning of its class. Of course, you would care to stay away from the sun….